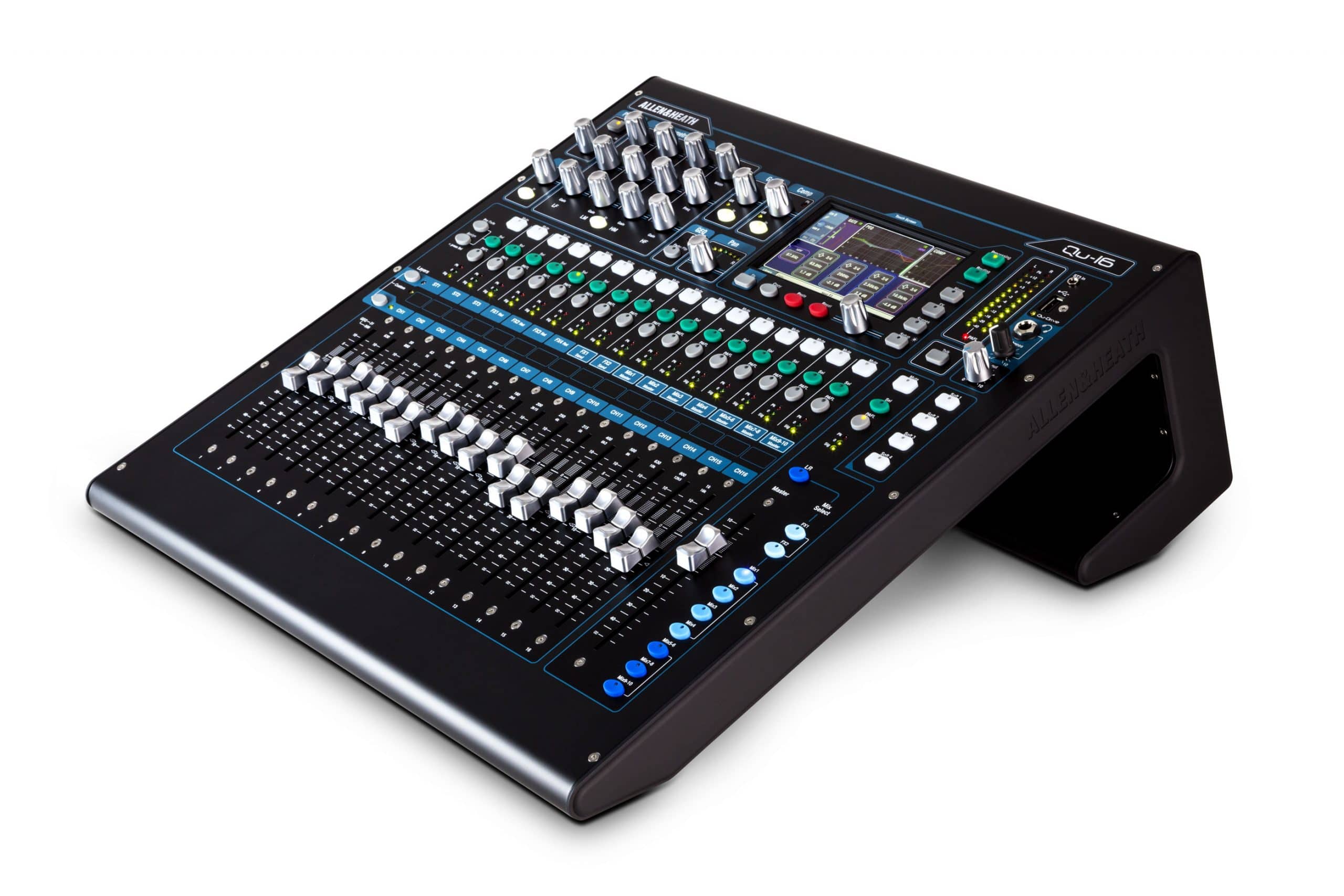 The Allen Heath QU16 is a 19-inch rack-mountable, 16 channel digital mixing desk which we have been using live for the last three years or so. It is the first digital mixer that I have used and came from a fairly budget end Behringer desk, with outboard compressor and EQ rack modules. When shopping around I found plenty of reviews from professional types, but what about your amateur band, without a sound tech and with maybe ten minutes to sound check at an average gig in a far from perfect room? Welcome to our Allen Heath QU16 Mixing Desk Review.

When you first open the desk, it feels well built and solid. It is fairly weighty, despite its U shaped ‘open plan’ design, coming in at just shy of 10kg. I personally like the modern U shape design, it makes the desk easy to pickup and carry around if you do not flight case it. We did end up fitting ours into a flight case, but were disappointed to find the mounting brackets are not included with the desk and cost an extra £60. For a £2500 desk, this feels slightly opportunistic. The flight case protects well, but does make this a weighty desk considering the relatively small form factor.

The input/outputs all sit neatly on the back of the desk. There are 16 inputs, which come with both XLR and TRS fixtures, helpfully reducing the need for any converters. We predominantly use XLR for everything, but this makes it easy when our keyboard player wants to plug directly in with a jack lead. There are two main XLR outputs, as well as an outstanding 10 monitor mix outputs. Monitor mixes 1-4 are separate mono mixes, while 5-10 are stereo mixes, effectively giving you seven independent monitor outputs; certainly enough for us! Each can be controlled via the motorised faders and are recalled using clearly labelled buttons to the right of the main sliders.

Each member of the band can control their monitor mix using the QU-You app, which we absolutely love. It means I can sound check the band, while each member tweaks their monitor mix independently. Being discretely on a mobile phone means ‘stationary musicians’ like our drummer and keys player can continue to adjust their mix as needed, as well play. We all use in ear monitoring, which means each member can push their mix as loud as they like with no chance of feedback in small rooms. This may be a drawback when using fold back monitors, with band members afforded the ability to increase their volume during the set, potentially causing feedback even when the initial mix was fine during soundcheck.

As with the monitor mixes, the main mix can be controlled via the motorised faders on the desk, or via a separate iPad app. Personally, I don’t like the ‘official’ A&H app and instead purchased a third party version. It seemed to be more intuitive and easier to control. It also had the benefit of  running on Android as well as iOS, which the A&H version does not. The ability to run the mix away from the desk is brilliant and something I feel I could no longer live without.

One small irritation is that you need a Wireless Access Point to connect any form of phone or tablet to the mixing desk to control the mix. This isn’t the end of the world, we purchased a £30 D-Link router and velcro’ed it to the underside of the desk hidden within our rack, connecting it with a 50cm CAT6 cable. Not the end of the world, but a direct, inbuilt wireless connection would have been nice.

The sound quality of the desk is outstanding. The pre-amps are silent and the inbuilt processing modules all improve the mix. The desk includes a dedicated EQ, Gate and Compressor on each channel, as well as the ability to insert four FX loops into the mix. The processing blocks have a number of useful presets, although I would have preferred more of these. You get ‘kick drum’ on the compressor for example, but not a number of different kick drums based on musical genre. Again, this isn’t the end of the world, but does make the first time setup slightly more involved.

I was concerned about ease of use when moving to a digital mixer. Lots of our venues are far from perfect acoustically and often only allow a very short sound check. I didn’t have time to be fiddling with lots of settings across each of the 16 channels and didn’t want to over complicate things with lots of effects. This however, just isn’t the case. While the initial setup takes some time, naming each channel and inserting the correct EQ, Compression and Gate inserts, from then on this desk is a massive time saver. The ability to save and recall scenes, with all of the settings recalled in the touch of a button, is again something I could now not live without.

Overall, I love this mixing desk. The ability to control the mix from an iPad in the crowd, with the motorised faders reacting is invaluable for a small local band like ours. The inbuilt EQ, compressor and basic effects can massively improve the mix, although I wish there was a wider range of presets. The sound quality is awesome and once you get over the inevitable initial learning curve, the desk is intuitive and quick to use. Not a cheap investment, but I would highly recommend.

You can find out more about the A&H QU16, using the Amazon shop link below: 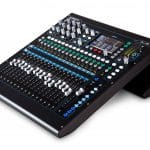